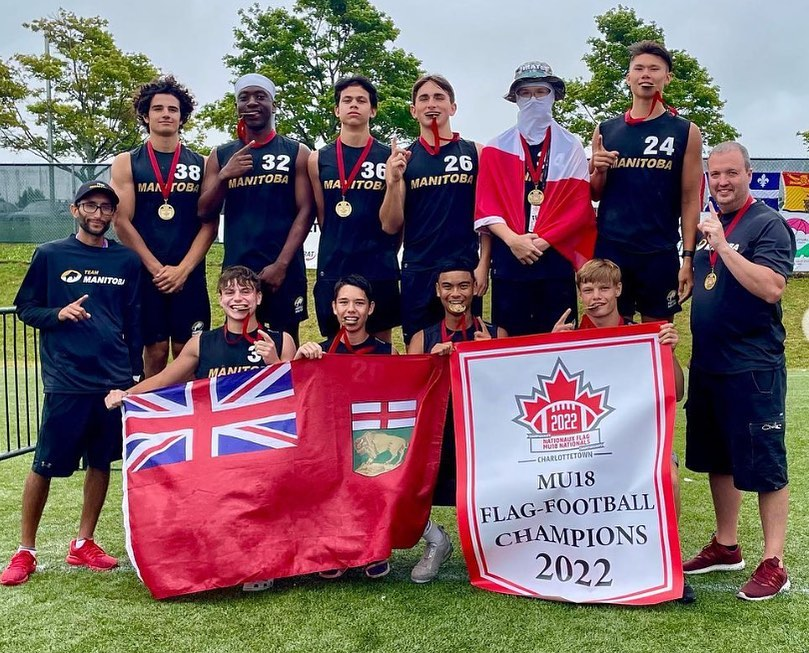 Entering the U18 flag football national championships in PEI in mid-August, Manitoba – despite being a powerhouse in the sport – were underdogs. One of the youngest teams in the tournament and without a big name such as Jackson Tachinski (former ANAVETS Bowl and flag football champion) slinging the rock, there was plenty of uncertainty as to how ‘Toba would do.

“I think we were definitely underdogs. I think with a couple of the other teams that we had won gold medals with, there was almost an expectation that we would be one of the top teams,” admitted head coach Jon Franklin, a six-time gold medalist in flag as a coach as well as the founder of the PIT Football League.

“Myself and [assistant coach] Raza [Butt], we preached being the smartest team out there. We were probably the youngest team competing at U18, so we were probably at a bit of a disadvantage in terms of size and speed, so we had to work out ways to win games against opponents that probably had more physicality than we had.”

In just over a month, Franklin and Butt used their bevvy of experience to help the squad transition from a bunch of skilled tackle players with previous flag experience, to a near-unstoppable force. After losing their first two games, they stormed back to win the gold medal, holding off tournament favourite Ontario 46-30 in the final.

Read the full story at Manitobafootballfeed.net.